Join Stewart Wallace on board his newly purchased 2015 Princess V52, as he has his yacht prepared in Plymouth before a trip north to its new home in Inverkip, Scotland. We spoke to Stewart to find out more about his journey and what led him to this V52.

So Stewart, why did you buy a Princess V52?
Well, in 2020, I bought a new 40-foot sports boat in Swanwick, which we sailed back to the Clyde. But we quickly discovered that it was a bit small for us. When you go to a marina in a non-fly 40-footer, you tend to have to get off and take a walk, especially if you’re with friends. But after Covid, we realised that we wanted our boat to be a destination in its own right – and with three separate socialising zones (the cockpit, the saloon and the lower galley and dinette), our V52 provides exactly that.

Having bought your V52 pre-owned, did you make many changes?
The owner of the boat hadn’t really been on board for 18 months. He was in London, the boat was in Falmouth and then Covid came along, so despite being six years old, it had only done 145 hours. It’s not good for a boat to sit there unused, so when the Princess sales team said they would move the boat down to their Turnchapel facility in Plymouth for maintenance and upgrades, I was very happy with that. It would have been impossible for me to project manage the work from Scotland and I needed to make it ready for its trip north to my home in Inverkip. 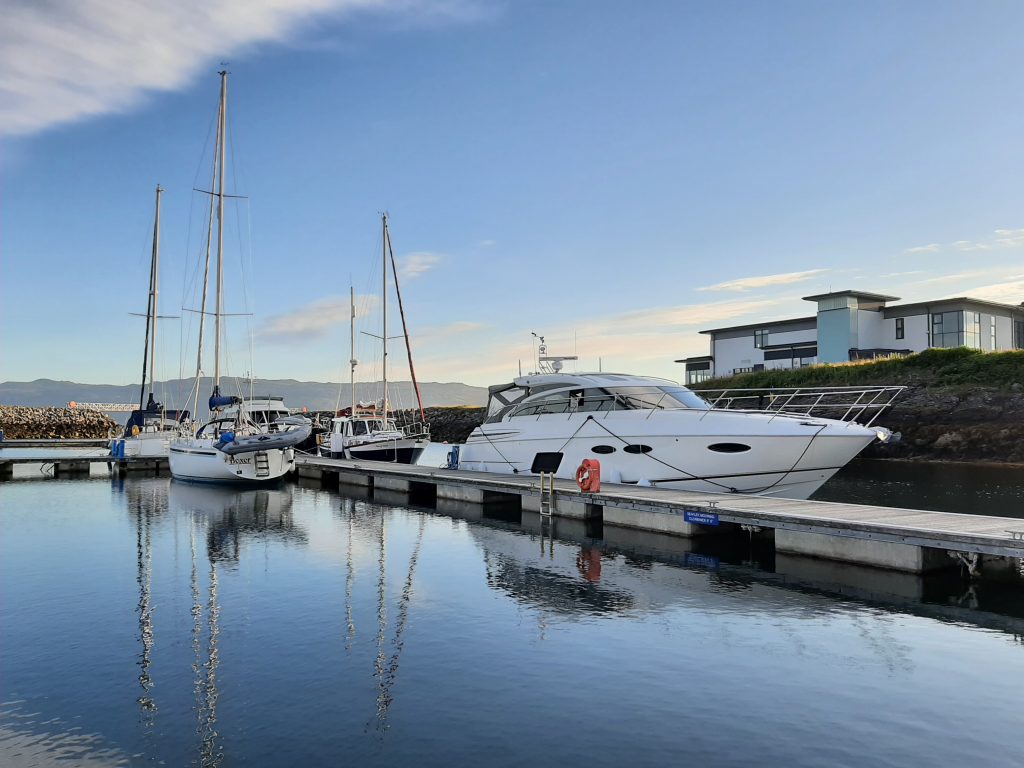 What kind of work did you have done?
This was my first pre-owned yacht and I wanted to get that special ‘new boat’ experience without necessarily paying ‘showroom’ money. So we had the canvasses remade and all the floors sanded and restained. We had the name changed to ‘Endless Days’ and we added USB sockets and electrical points around the boat. We also upgraded the helm with a new 16-inch chartplotter, as well as AIS, a reversing camera, an anemometer and a Wi-Fi system.

Has that made it feel like a custom boat?
Absolutely. Having been boating for the last 15 years, I know what works for me and what doesn’t, so things were tweaked to fit my requirements. In the end, there were 65 items. It was a huge schedule of work but I wanted to get the boat in the best condition possible because her first journey was going to involve a lot of exposed waters.

So how was the trip from Plymouth to Inverkip?
Well, I have known people who appoint a professional skipper and two days later the boat arrives in Scotland, but I didn’t want to do that. I wanted to enjoy the journey because it’s not every day you get to go round Land’s End or cruise the Pembrokeshire coast. I took two of my friends with me and they’re also retired, so it wasn’t a race. The plan right from the start was to take our time.

Which route did you take?
On the first leg, we stopped off at Fowey in Cornwall. It’s a beautiful little town and we had a lovely time there. From Fowey, we went round Land’s End and across the Bristol Channel into Milford Haven, before heading round the Pembrokeshire coast and straight across Cardigan Bay to Pwllheli in North Wales. There’s a firing range in Cardigan Bay, so you have to phone up and get permission to make the transit because you don’t want to be a live target!

Where did you head after North Wales?
We wanted to spend three days in Liverpool but there’s only about two hours either side of high tide to get into the sea lock. We were given a time to be outside the lock and it was a bit tight, so I ended up cruising up the Mersey at 30 knots, past all the famous landmarks – the Titanic Building, the Liver Building, and Albert Dock. I was expecting the harbourmaster to scream down the VHF at me, but he never did. And what a fantastic city Liverpool is. We did all the tourist stuff. We did the Beatles Open Top Bus Tour; we went to the maritime museum; and we ate at Albert Dock. I’d recommend it to anybody, but you need to get your navigation and timings right or it can get a bit tense! 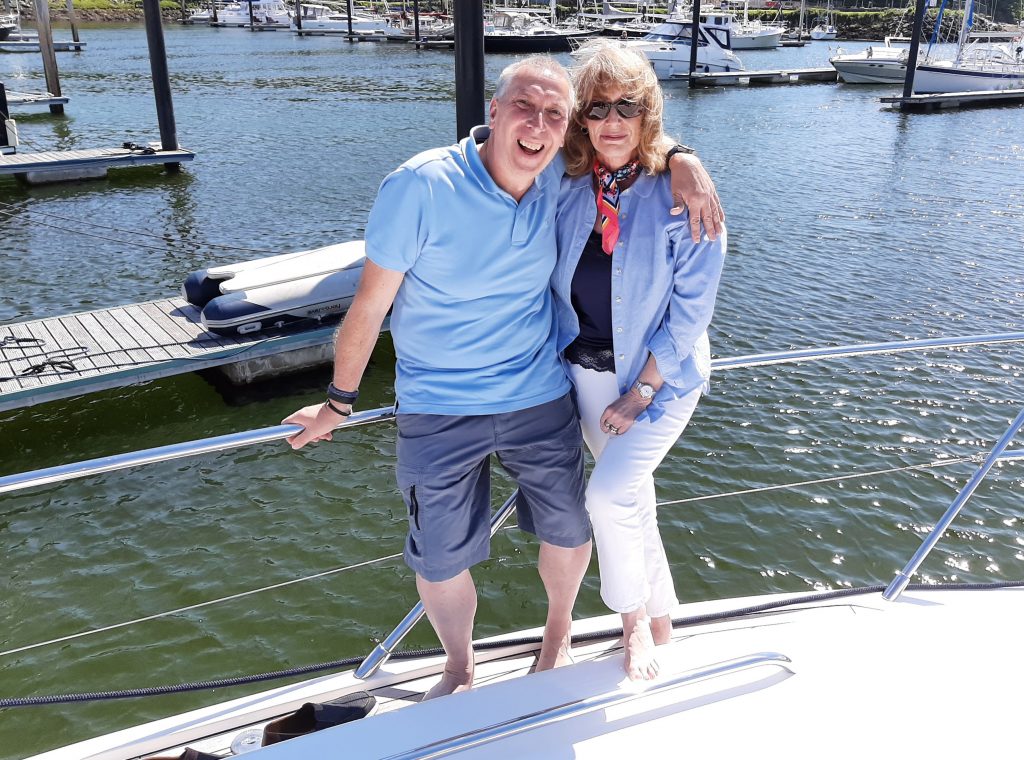 Did you head straight from Liverpool to Inverkip?
From Liverpool, we dodged the wind farms across Morecambe Bay to Whitehaven in Cumbria, where we spent another two days. Then we came back round the Mull of Galloway and up to Inverkip Marina on the Clyde. It was an eight-day journey in all.

What was your best moment?
I really wanted to visit places we hadn’t been before so a Menai Straits passage was a must for me. You have to get the tides and the weather right, and the navigation is quite tricky because the buoy system changes halfway up – but we made good time from Caernarfon to an area between the two bridges called the Swellies. It’s got a notorious reputation but we hit it at the right time. It was just before high tide and there’s a lot of power on the boat so the turbulent water wasn’t a problem. And as we passed Bangor Pier at the top end of the straits, I felt a really profound sense of satisfaction.

How did your V52 perform?
It really looks after you. It’s a very stable and solid boat. It doesn’t creak or rattle and it gives you a tremendous sense of confidence. As a shaft-driven boat, it also feels planted in the water and the space is really fantastic. One of my friends stayed in the forward cabin and the other in the lower dinette conversion, and that worked a treat because it meant we could use the crew cabin for storage. I’m really pleased with the upgrades too and, despite the fact that it’s 55 feet long, it’s the easiest boat I’ve ever handled. With the thrusters and the ‘hold’ function, I find it very comfortable manoeuvring at close quarters – and my wife loves it for that same reason. By her own admission, she’s an ‘incompetent sailor’ but the fact that I can do everything myself means there’s no stress for her at all. 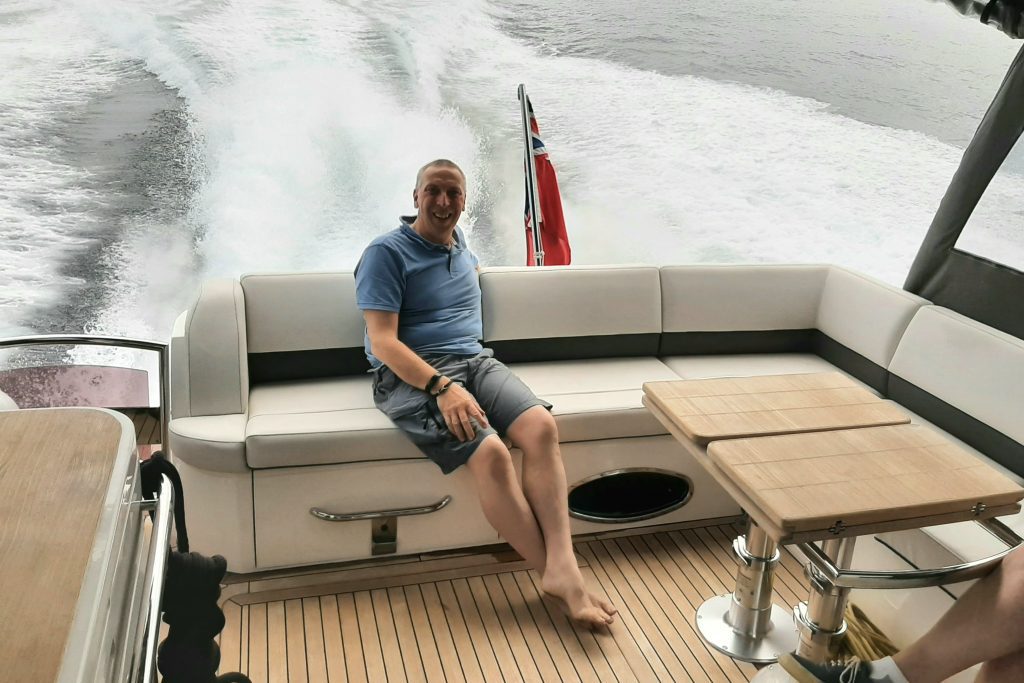 What are your cruising plans for the future?
In three weeks’ time, I’m heading up to Oban for a month on the west coast of Scotland in and around the islands of Mull and Skye. And then we have two ideas for 2022. One is to go to St Kilda, 60 miles out in the North Atlantic, to visit the sea stacks. The other is to go right up to the top of Scotland, around Cape Wrath and across to Orkney, before coming back down the east coast and then west through the Caledonian Canal. We’ll take about a month to do that, so if the weather’s bad, it won’t be a problem. We can just stay in port because the boat is so comfortable, it feels like a floating apartment!