Here, we take a look back at the last 50 years of Princess history, from the 60s to now.

Genesis for Princess Yachts – the story began in 1965 in a rented shed in Newport Street. Three men looking to enter the charter business but with a dearth of funding bought a hull and deck mould from Senior Marine and began fitting it out. The charter business never got off the ground but the completed boat sold quickly. Realising they could be on to something they decided to build another and Marine Projects, one of the most prolific boat building companies in Europe, was born. Available initially with twin Perkins four cylinder diesels, later boats sported Volvo Penta diesel engines – in all cases mated to sterndrive propulsion. Updated in 1969, the Project 31 became the very first Princess, the Princess 32. Successful from the very beginning, over 600 boats were built. 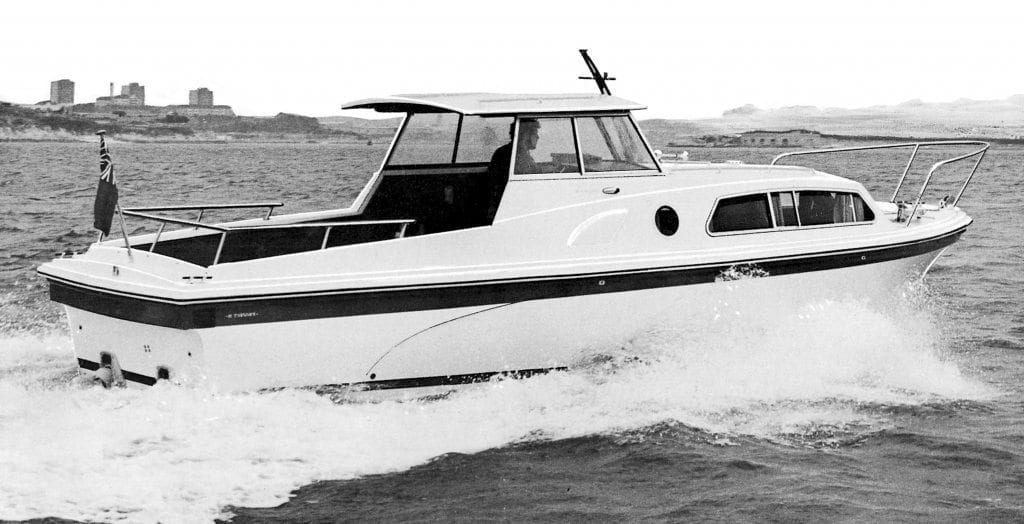 With the Princess 32 selling well and the range augmented by a smaller model (the Pilgrim 25 which became the Princess 25) it was time to begin the unstoppable drive up market. Designed by John Bennett and launched at the London Boat Show in 1974 it was one of the largest boats in the Earls Court exhibition hall and immediately set the tone for the direction of the company. It was one of the first Princess yachts to feature a flying bridge (as it was then known – now commonly shortened to ‘flybridge’). And it introduced shaft drive and an enclosed deck saloon for the first time on a Princess, and featured two cabins and two heads. Initially launched with Thornycroft and then Ford Mermaid 120hp diesels, demand for greater performance lead to a second hull profile, the original ‘Y’ hull sporting a small keel for low speed directional stability and a ‘V’ hull without the keel capable of supporting twin engines of up to 210hp.

In 1980 Marine Projects was approached by a naval architect called Bernard Olesinski with plans for a thirty foot cruiser. With the successful but ageing Princess 32 due for replacement, the design was accepted and the Princess 30DS launched at Southampton Boat Show in 1980. DS stood for deck saloon, and the 30DS replaced the 32 in the range. Rather than the open backed wheelhouse of the 32, the 30DS had an enclosed deck saloon (hence the ‘DS’ of its nomenclature) with a sliding roof section, although there was a less popular open backed wheelhouse version called the 30S. Available with single or twin shaft drive or sterndrive engine installations the boat was built with everything from a single 60hp for river use up to twin 200hp diesels or 210hp petrols which lifted the top speed past 30 knots. A flybridge version was added in 1986, further broadening the options. Not only did the 30DS prove a worthy successor to the 32 over its decade in production, but the collaboration with Bernard Olesinski extended to the design of every Princess since.

By the early eighties the largest Princess yachts had barely passed forty feet, but Princess commissioned Bernard Olesinski to design a flagship mid forty foot flybridge yacht. When it was launched in 1982 it was the largest production motor yacht built in the UK and it propelled Marine Projects into the big league. The Princess 37 had had some export success in Northern Europe but the 45 opened up the Mediterranean, proving popular with UK buyers that boat abroad as well as attracting foreign custom. The initial build rate of one boat a month was quickly revised, the 45 selling at triple the anticipated rate. Not just a modern and spacious design, the 45 was a phenomenal sea boat, widely lauded by the maritime press. At the time Managing Director David King reputedly stated that he thought the 45 would be the largest model Marine Projects would ever produce. Today the smallest flybridge Princess is slightly longer…

With a successful range of flybridge and deck saloon models firmly established, the early eighties saw fresh markets sought, in particular the open cockpit sportscruiser sector, and in 1983 the 286 Riviera was launched. With its raked screen, flat foredeck and sporty GRP radar arch it was at the cutting edge of eighties sportscruiser design, but luxury and practicality had certainly not been forgotten. A massive eleven foot beam created plenty of space below decks for a generous dinette forward, an L-shaped galley opposite the heads and a separate mid cabin aft with a double berth that ran transversely beneath the cockpit. Motive power came via a range of twin petrol engines ranging up to V8 5.0 litre AQ211 motors delivering 210hp each for a top speed in excess of 35 knots. Twin diesel engines of 130hp and 200hp were also available. The 286 Riviera became the forerunner of a range of Princess Riviera cruisers that spanned twenty six to forty six feet. 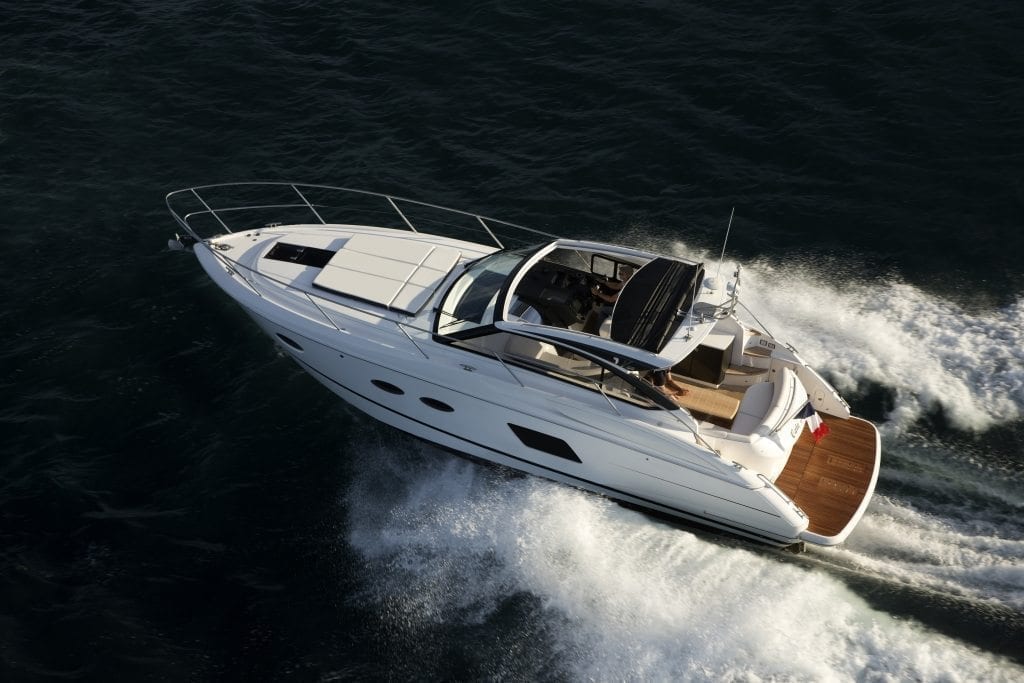 Princess sportscruiser range. Out went sharp edges, stainless steel framed windscreens and bolt on bathing platforms – in were soft curves, high topsides, GRP screen frames, forward sloping radar arches and coloured hulls. The ‘Riviera’ tag was gone too, the new vogue marked by the simple designation ‘V’. First off the Olesinski drawing board was the V39.

Unveiled in 1994 it looked sensational, but the big news – literally – was inside. Those high topsides created phenomenal internal volume – over six feet of headroom, two cabins and a huge heads proved beyond doubt that the days of compromised sportscruiser accommodation were over whilst a new breed of Volvo Penta KAD 42 diesel engines lifted the performance past thirty knots – neatly demonstrating that you could indeed have your proverbial cake and eat it. Mild facelifts took the V39 through V40 and V42 iterations that spanned fifteen years and 500 boats, making this the most popular vessel in Princess history. So far…

Whilst the V39 was taking the lower end of the market by storm, the inexorable rise upmarket continued unabated and in 1996 the very first ‘Metre’ yacht was announced. Distinctive oval saloon windows, a funnel style radar mast rather than the usual goalpost arch and ‘superyacht’ high gloss joinery marked the 20M out as something really special, even by Princess standards. Powered by twin MAN diesels of between 800hp and 1,360hp it was clear that performance had not been lost in the pursuit of luxury.

The new millennium brought a new name for the business and Marine Projects (Plymouth) Ltd became Princess Yachts International Plc. But despite the change of name and the successful expansion into new markets the commitment to intrinsic values remained the same and in 2003 the Princess 42 was born. Able to trace its roots back to that first flybridge craft of thirty years earlier, the 42 was a two cabin two heads family flybridge cruiser with twin shaft drive diesels engines just like the Princess 37. But whilst the format might be familiar, the execution was very different. The first true production line assembly, the 42 was built in stages as the boat moved down a line, emerging at the rate of one a week. Styling was bang up to date too, being one of the first boats to feature flush glazing and a new style of sweptback radar arch whilst inside contemporary high gloss cherry woodwork surrounded the very latest innovations like the soft touch non reflective helm.

Nearly fifty years in and the multi award winning Princess V48 proves that the innovation and far sightedness that has stood the company in such good stead remains a core philosophy. IPS pod drives, resin infusion construction, a choice of superstructure and cockpit layouts (deck saloon and ‘Open’) and a full beam full headroom master cabin place the V48 at the very cutting edge of current technology and thinking. 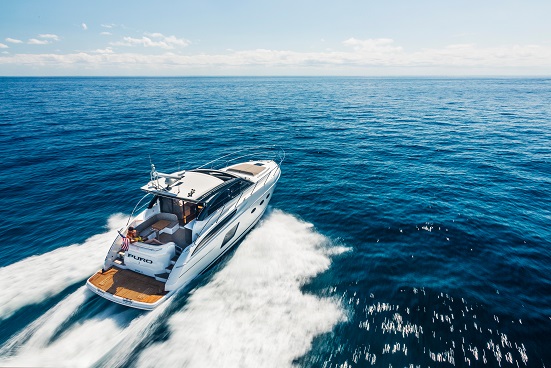