Join us as we step on board a Princess V40 with Princess owner, Sven Deutschmann.

There are boaters and there are boaters. And Sven Deutschmann and his wife Bianca are the latter. “There are well over 1,000 boats in our marina at Ancora Neustadt at the Lubeck Bay in Germany” Sven tells me. “Ninety percent of them travel maybe 40 or 50 miles at most along the coast for a day trip and then return. Our boating is very different, we like to travel, we like to explore”. 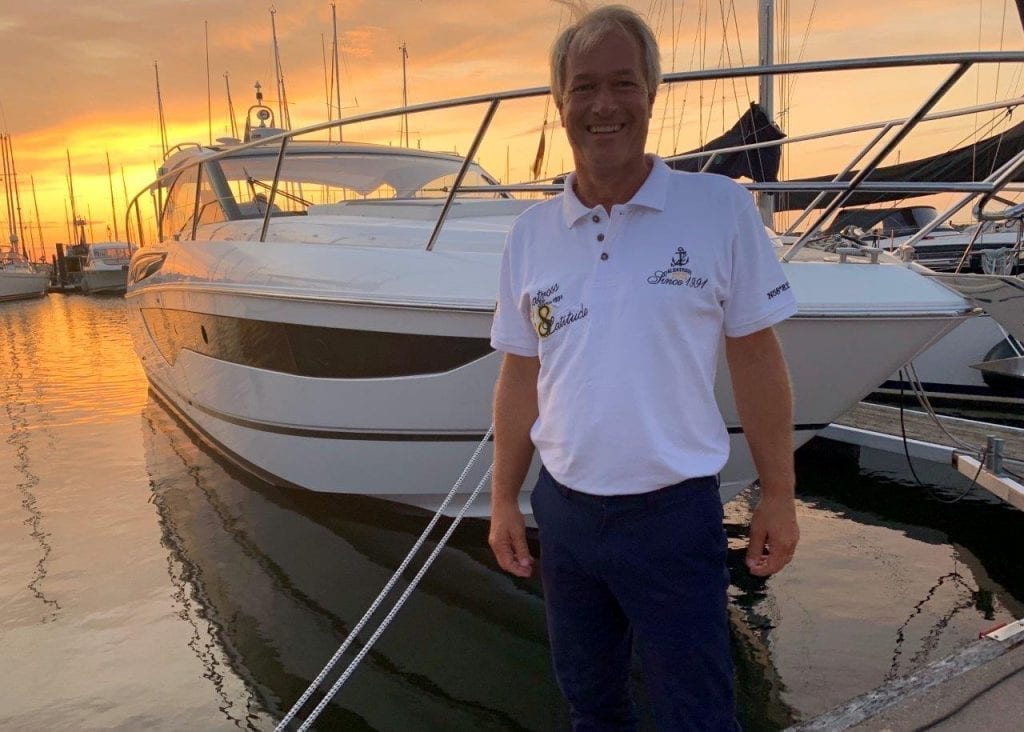 The couple’s adventures began with a single engined Crownline sportscruiser in 2002. It’s a boat that soon gave way to an Elan 35 which, with its twin engines and larger cabin, enabled longer voyages to destinations further away. “It was 18 years of experience in the Baltic Sea with those boats that enabled us to learn precisely the make up of the perfect craft for us which would enable the sort of extended cruising we had in mind. Size was the starting point. It’s easy to say that the bigger the boat, the better for distances and spending time aboard, but for where we wanted to go, up through Denmark and Sweden, there is an important limitation. The marinas are so busy in the high season that finding a berth for anything much larger than 40ft is a real issue. But importantly there is also the beam to consider, anything above 4 metres and you have real problems.

Of course there is more than physical size to take into account. “With distances between ports of anything up to 150 miles, we needed a boat that would cruise at close to 30 knots, and it had to do so efficiently. When you are looking to cover big distances then the litres per mile become far more important than litres per hour – it’s how efficient the boat is and how far it can travel, not how long it can travel for, that is important. Plus the boat must have good seakeeping of course”. The couple quickly focussed in on the Princess V40 as the boat that had it all. Build quality, space, an ideal layout and all within a 3.81 metres beam. Perfect. And with its slippery sterndrives mated to latest generation twin Volvo Penta D6-330 common rail diesel engines and a hull penned by renowned naval architect Bernard Olesinski, the Princess V40 had seakeeping and range covered off too. 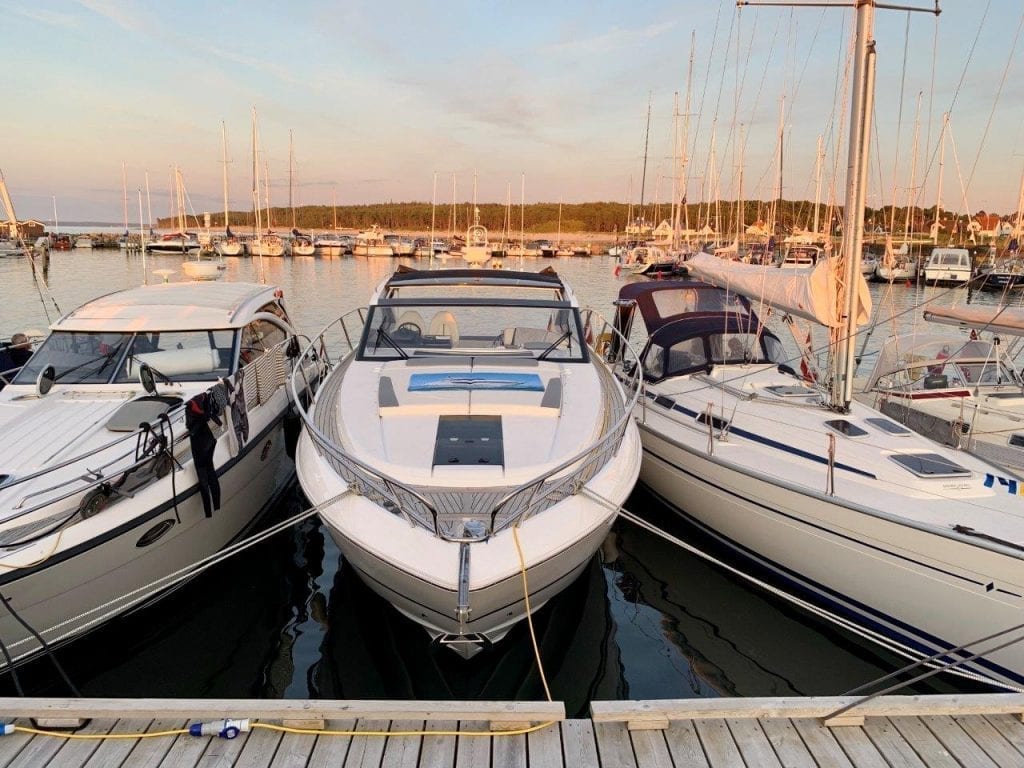 A boat was ordered specifically to the Princess owner’s request. “We had AIS fitted to this boat, which transmits our position to other AIS equipped boats as well as informing us of the positions, speed and bearing of their position. On one leg of our trip we hit thick fog that had not been forecast and were very grateful for this system. For navigation we chose Raymarine Axiom fitted with Navionics charts plus a back up plotter, life raft and other safety equipment. Precise navigation is very important in the Swedish archipelagos, where there are plenty of rocks. Bianca deals mostly with navigation and we both drive the boat”. With the perfect boat, perfectly equipped, Sven and Bianca slipped their moorings in the summer of 2019 and embarked on the perfect trip.

“We headed first for Warnemünde about 50 nautical miles (nm) to the east along the German coast for the night, and then headed north for Klintholm in Denmark and then up to Copenhagen and then Hornbaek. The next leg was a big push, 120nm to Marstrand in Sweden and then we worked our way all the way up through the Baltic Sea of the Kattegat and the Skagerrak to Gothenburg (Swedish west coast) and the archipelago of the Swedish Skårgarden where we cruised the area with its hundreds of islands. We‘ve been to picturesque marinas such as Marstrand, Smögen, Käringön, Fjällbäcka, Grebbestad and many more. Beautiful places and islands – some with Mediterranean like promenades and some that are small islands with fishing harbours and beautiful bays for anchoring at very quiet and natural regions, where wild horses roam free and you feel like you’ve stepped 200 years back in time. One memorable marina was a beautiful old fishing port. Behind our Princess V40, the water stretched out between the islands totally sheltered and flat calm, but a short walk took us to where we could look out over the Skaggerak strait. It faces the North Sea where we could watch the sun setting over huge rollers, safe in the knowledge that our cruise was sheltered and independent of these sea conditions”.

In all, the couple cruised over 740 miles, visiting 16 marinas in 20 days. “The size of boat really paid off, there was only one marina we couldn’t get in to, where boats were already rafting five deep. We made sure to book in advance and had no other problems. But what’s interesting is that despite limiting ourselves in the boat size, we never felt cramped. There is plenty of space on board, the layout works extremely well for us and it was an entirely comfortable experience. The weather played its part too, we never put the aft canopy up the entire time. Instead we just enjoyed the fresh air, cooking seafood from lobsters to shrimp on board and enjoying the company of many other enthusiastic boaters, many from Norway working the trip in the other direction, many of them on board Princess boats of differing ages”.

It was a trip that was followed enthusiastically by many fellow berth holders from Ancora Neustadt Marina, who were able
to track the couple on real time by logging into web sites that display AIS vessel positions. “This tour is a real dream for boaters. We’ve known many other owners of motor yachts in our home marina in Neustadt for more than 18 years – some have made it to Denmark but most of them have never made it to Sweden or to the Swedish islands. Actually the Swedish Skårgarden is a big dream for many of us. And I know that some of them last year ‘followed’ visually our route via the shared AIS data day by day” smiles Sven. It was the perfect trip on the perfect boat. “The V40 performed
superbly – great for cruising at sea and also for the long haul passages with more 150nm distance i.e. from Copenhagen to Marstrand (and later back to Malmö and back to Germany). Excellent performance and the perfect yacht experience”. 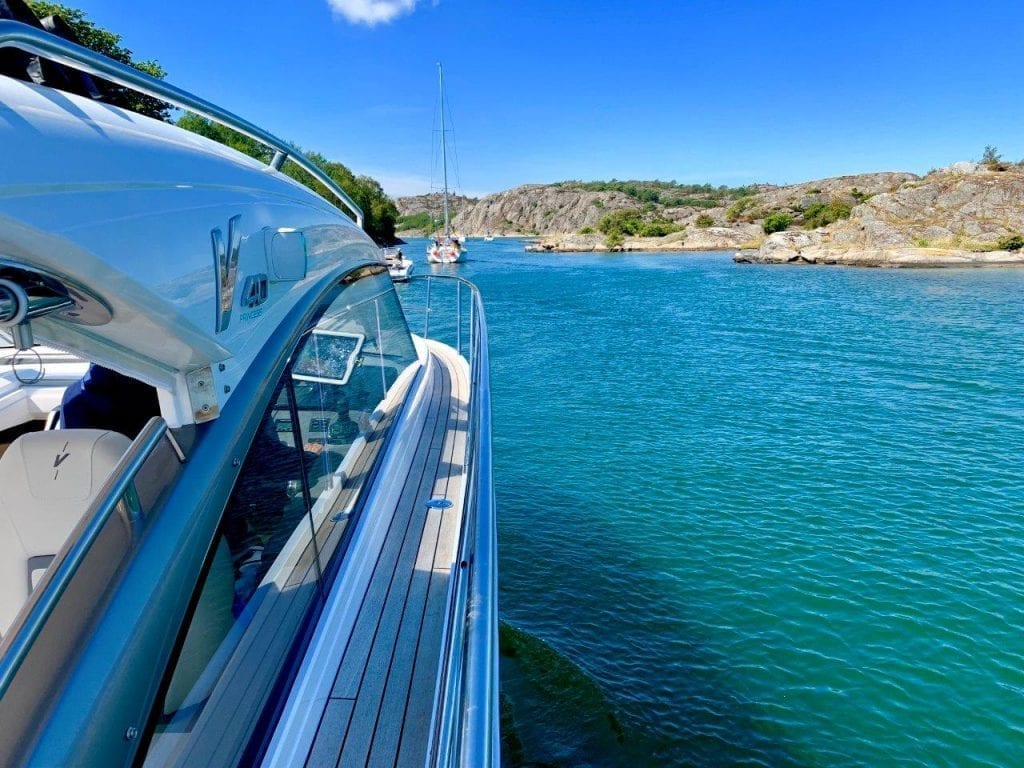